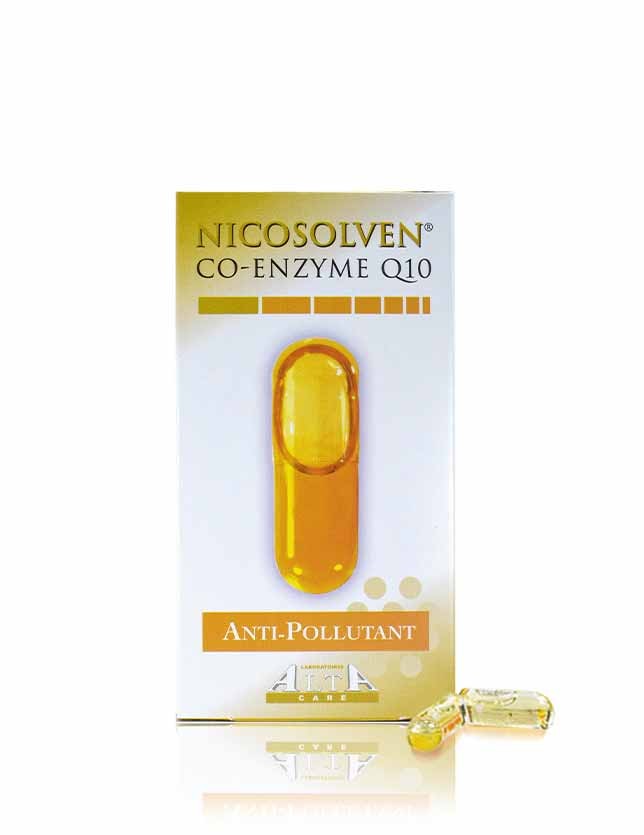 
The formula of Nicosolven CoQ10 Liquid Capsules is highly recommended for smokers and non-smokers, to keep optimum oxygen levels in the cells, as CoQ10 is a powerful anti-oxidant which can help maintain a healthy heart and contribute to improve immune functions.

Nicosolven CoQ10 Liquid Capsules provide 30mg Ubidecarenone (Coenzyme Q10) with each liquid capsule. CoQ10 is a powerful anti-oxidant which can help maintain a healthy heart and contribute to improve immune functions. The formula of Nicosolven CoQ10 Liquid Capsules is highly recommended to keep optimum oxygen levels in the cells. This is beneficial to smokers and ex-smokers, but also, as prevention, for non-smokers and particularly people who live in polluted areas.

Coenzyme Q10 is an endogenous cellular constituent present in mitochondria, a mediator of electron transport and energy production. A study by Crane and Navas has also confirmed an active role of Coenzyme Q10 in keeping Vitamin E and Vitamin C in their reduced state.

Since CoQ10 is such a fundamental component of our body, it is not surprising that CoQ10 supplements are among the most popular on the market.

How is Nicosolven COQ10 Liquid Capsules different to other supplements?

Most CoQ10 supplements are available in the form of hard or softgel capsules.

Thanks to the liquid capsule technology, the CoenzymeQ10 supplied by Nicosolven Liquid Capsules is immediately available for absorption. One of the main advantages of liquids is that the body does not need to break them down as they are immediately absorbed, while solids have to be dissolved in the stomach or intestinal tract before they are absorbed. Therefore, when Coenzyme Q10 is presented in solid capsules or tablets, it has to be emulsified in the intestine, which takes time, because the body needs oil and emulsifiers to create a CoQ10 suspension or a solution and subsequently absorb it. In Nicosolven CoQ10 Liquid Capsules, instead, the Ubidecarenone is already dissolved in oil inside the capsule.

By supplying CoQ10 in this liquid form, Nicosolven CoQ10 Liquid Capsules ensure higher plasma CoEnzyme Q10 levels when compared to other supplements in the form of pills or softgel capsules.

A comparative study has shown that plasma CoQ10 levels created by Nicosolven CoQ10 Liquid Capsules are higher than other delivery forms (+32% compared to softgel capsules and +34% compared to powdered tablets).

Studies have demonstrated that consumers prefer the liquid capsule option offered by Nicosolven CoQ10 because they perceive its higher efficacy, quality, convenience, faster action and safety. (Market research performed by GfK Global in Germany with a panel of 100 consumers).

These are the reasons why Nicosolven CoQ10 Liquid Capsules is a unique and highly distinguishable product and represents a better investment for distributors who want to enter the growing CoQ10 market with an innovative and more effective product.

1 to 2 capsules per day or as directed by your pharmacist or doctor.

The nitrogen bubble inside the capsule guarantees protection to the ingredients in the solution and allows the liquid to move. Crystallization may occur when capsules are exposed to temperature changes. This is a normal, reversible phenomenon which occurs in other natural products such as honey or olive oil, and the crystals will dissolve as soon as the product is again exposed to warmer temperatures (above room temperature). Please be informed that the stability of ingredients is not in the least affected by the crystallization, as was confirmed by HPLC assay on the level of CoQ10 in our capsules. 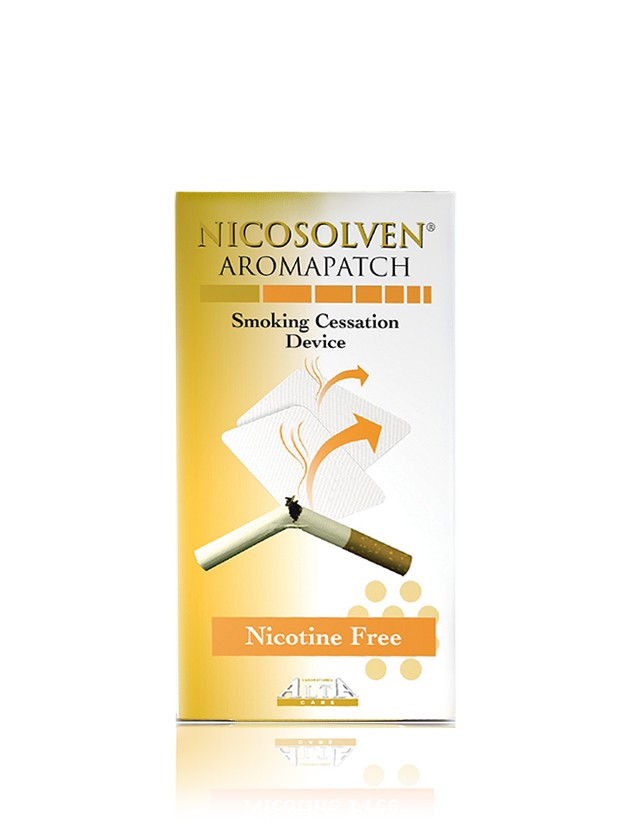 Nicolsolven Aromapatches is a nicotine-free medical device which uses essential oils to help you gradually reduce the daily number of cigarettes smoked.